Not so long ago, I stopped at a local Bar/Restaurant near where I live. While I was there sitting at the bar, having something to eat with my usual Cabernet Spritzer,  I was told that a Singles Meetup group was coming in and they made some room for dancing.  They started drifting in little by little ending up with a nice crowd. 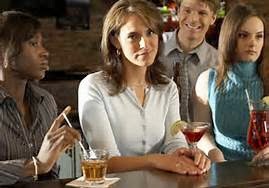 There were a lot more women than men. Not good. A bunch of them sat to my right at the bar talking amongst themselves, having drinks and of course deciding what they wanted to eat. Some women danced with each other.

The men talked to each other and some just stood around. One friendly guy was taking pictures. I spoke to a couple of guys while I stayed seated at the bar. One gentleman, 54 yrs old, divorced who was just standing  around told me the women looked like they were all together and having a fine time without him. He didn't know how to intervene or even if he should!

I reminded him that we were talking and he said it was because I started the conversation and he was enjoying it. I explained that women want the man to approach, especially older women. He was concerned that maybe she wouldn't be interested or maybe he wouldn't be after speaking with her. Now, I had to give a mini lesson on flirting before he made his move.
Similar situation with another gentleman. He said with all the women there, you would think it would be easy but he felt no one was interested in him.

Later, I turned to the several women seated to my right at the bar. I asked them why they were stuck together at the bar. One said "Isn't that always the way. The men on one side and the women on the other"  Then another said "We're here! Why don't they come over?" I did agree that should happen. Men should get up to bat and if they strike out; So what? Just get back up.
As for the ladies, instead of appearing more interested in food or each other, they could look around, smile at a potential honey and let him know they would welcome his approach.

The reality was Soo high school. Most of these people were over 45.  They still were apart. All of them, men and women alike, agreed they were there mainly to meet the opposite sex. Really?
Posted by Martha's Singles at 11:39 PM